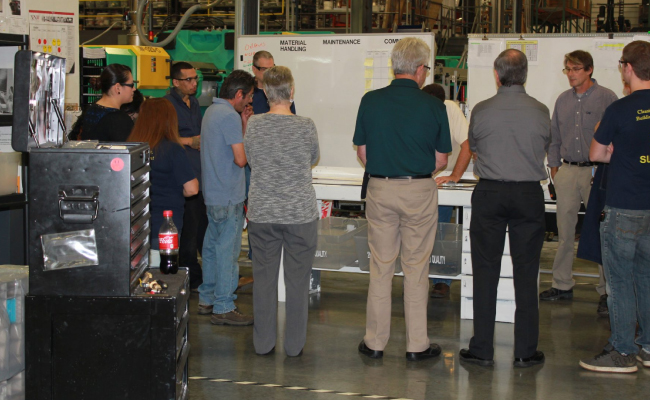 Quality Time: Why a First Article Inspection is the First Step to Ensure Quality Production Runs

When conducting an experiment, the steps are taken to test a hypothesis need to be thorough and well documented, because the results of an experiment are defined by their ability to be replicated, and the steps to reach a conclusion are just as important as the conclusion itself. The same can be said when measuring the quality of an injection-molded piece. A quality mold is judged by its ability to produce a consistent part the 500th time it’s used, rather than the first time it’s used, because that 500th part is as important as the first part, and so is every part that comes between and after.

While, in theory, the results of an experiment should be the same every time, there are actionable steps that can be taken to help guarantee consistency and quality from a molded part. One prominent method is by performing a detailed quality check — known as a First Article Inspection, or FAI — to verify a part’s consistency with pre-determined quality specifications.

What is a First Article Inspection (FAI)?

A First Article Inspection is a formal, documented inspection method, used to compare and verify that a part’s features align with the specifications laid out by the customer. During the FAI, a part is checked for a number of criteria — wall thickness, density, material, finish, color, weight, etc. In the medical, aerospace, and automotive industries, there are strict industry requirement standards set for First Article Inspections, but in general, performing an FAI before launching into a full-scale mass production can benefit all industries.

The First Article for an inspection is not always literally the first part run from a mold, and in some cases, it’s more than one part. The First Article is a representative sample from a production run using the exact materials and methods that every other run for that part will follow. Because the methods need to mirror those from the actual mass run of the part, a prototype or pre-production model does not qualify for an FAI.

A Proactive Approach to Quality Control

The purpose of the FAI is get out ahead of potential mold issues, and to cut down on the potential for waste. Rather than allowing a production run to be performed only to find out that a defect has gone unnoticed, performing an FAI gets out ahead of issues, identifies them early on, and allows them to be solved to ensure that production runs can be completed with confidence that consistent, quality parts will be molded.

“First Article Inspections save time in production,” says Bob Acerrano, Quality Manager for Hansen Plastics. “By performing a first article inspection, we are verifying that the process can consistently produce parts that meet the print specification. For example, dimensional issues can be identified and addressed before going into production.”

Saving time in production by performing an FAI means saving money for the company and the customer while protecting quality. Even knowing this, some choose to forgo using a First Article Inspection before launching into a production run, and while an FAI isn’t required for every application, it does carry risk to complete a production run without completing one.

According to Bob, “Starting production without an FAI has great risk associated with it and should be evaluated. You could potentially produce and ship parts that may have a fit and or functional issue that is critical to the part, but not discovered until the part is used in its intended application.”   Mitigating risk and waste, and ensuring consistency and quality are top priorities when producing injection molded parts. By utilizing First Article Inspections, these goals are easier to achieve without adding risk or exceptional amounts of time to a production run. With HPC, the goal is always striving for zero defects and customer satisfaction through quality products. For more details on the technologies and techniques Hansen Plastics utilizes, visit HansenPlastics.com, and for more details on producing parts with HPC, reach out today.

Get news from Hansen Plastics Corporation in your inbox.

By submitting this form, you are consenting to receive marketing emails from: Hansen Plastics Corporation, 2758 Alft Lane , Elgin, IL, 60124, US, https://www.hansenplastics.com/. You can revoke your consent to receive emails at any time by using the SafeUnsubscribe® link, found at the bottom of every email. Emails are serviced by Constant Contact.